Notably, MLB and the Major League Baseball Players Association (MLBPA) have made a joint donation of $1 million to the Negro Leagues Baseball Museum (www.NLBM.com) in Kansas City, Missouri to complement efforts to educate and raise awareness of the impact the Negro Leagues and its players had on the sport and society. Funds from the donation will support the Buck O’Neil Education and Research Center, located at the Paseo YMCA, which will be a public use facility that incorporates the latest in interactive technology and state-of-the-art research equipment, allowing visitors, students, researchers and fans to study every aspect of the Negro Leagues and social history. When completed, the renovated building will house more than 40,000 square feet of archival materials, educational areas, exhibits, conference facilities and administrative offices that will advance the Museum’s mission and strengthen its position as an internationally recognized attraction and institution. In addition, the Center will be home to an innovative curriculum for students from around the country to use baseball to learn math and science.

The donation is also intended to spur additional contributions to the Museum via a special centennial fundraising platform. Fans can pitch in their support by donating at nlbm.com/centennial. 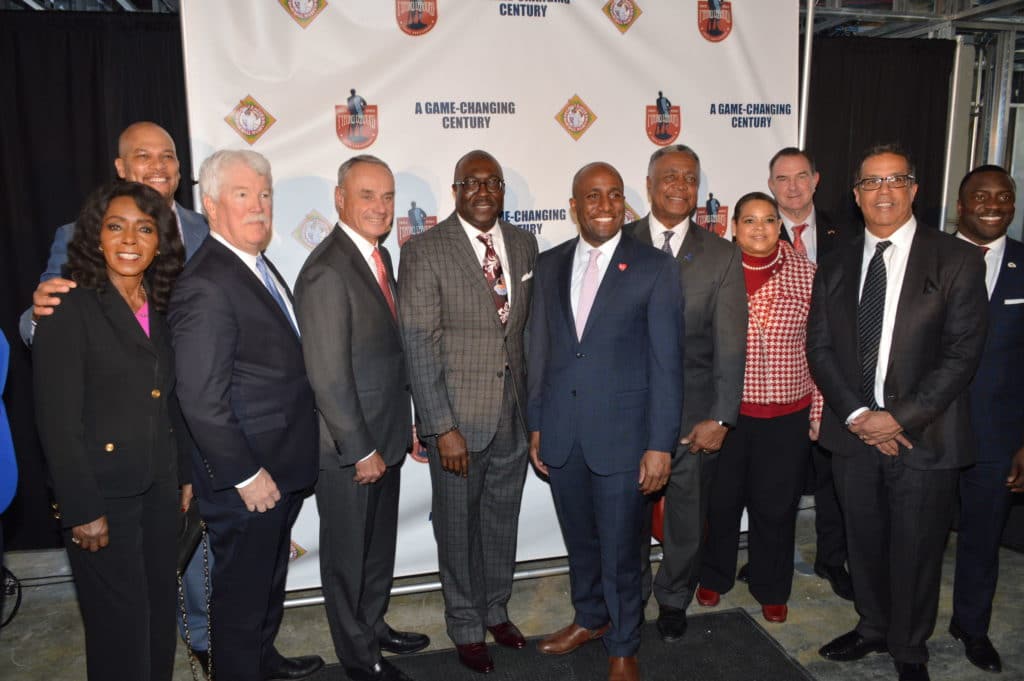 Additional activities will be in association with the Negro Leagues Baseball Museum and its president, Bob Kendrick, who continues to lead the museum, a physical memorial to the first successful, organized professional Black Baseball League in America.

“Major League Baseball is honored to recognize the men and women whose legacies in the Negro Leagues greatly contributed to the history of our sport,” said Baseball Commissioner Robert D. Manfred, Jr. “We are proud to work alongside Bob Kendrick and the Negro Leagues Baseball Museum to educate our fans and share powerful stories of perseverance and excellence, as well as a love of the game that sustained the Negro Leagues for decades.”

Tony Clark, Executive Director of the MLBPA said: “The men and women who played in the Negro Leagues are and forever will be part of our community of ballplayers. They brought to our game levels of skill, passion and integrity under the most challenging of circumstances that both inspired and entertained generations of fans in the decades before and after integration. Their legacy should be celebrated and never forgotten.”

Bob Kendrick said: “The Negro Leagues Baseball Museum is grateful for the generosity and continued support of Major League Baseball and the Major League Baseball Players Association which further advances our efforts to preserve, celebrate and educate the public about the transcending legacy of the Negro Leagues. The formation of the Negro Leagues in 1920 was a watershed moment in baseball and American history and we look forward to collaborating in a league-wide show of solidarity to commemorate this game-changing milestone.” On Saturday, June 27th, all Clubs will commemorate the league-wide recognition of the centennial celebration. MLB players, managers, coaches and umpires will wear a symbolic Negro Leagues 100th anniversary logo patch during all games. The logo, a derivation of the official logo created by the Negro Leagues Baseball Museum, also will be featured on base jewels and lineup cards. Clubs may also support with special activations at each ballpark.

MLB will provide an opportunity for hundreds of youth baseball and softball players, including high school and college student-athletes, to learn about Negro Leagues history. Kendrick is already scheduled to attend the Andre Dawson Classic, a college baseball tournament hosted by MLB at the New Orleans MLB Youth Academy to highlight baseball programs at Historically Black Colleges & Universities (HBCUs) on February 15th, and the Hank Aaron Invitational, a development experience designed to serve underrepresented high school age players operated by MLB, the MLBPA and USA Baseball (and funded by the MLB-MLBPA Youth Development Foundation) at the Jackie Robinson Training Complex in Vero Beach, Florida in July. Additionally, in February, MLB will host Kendrick in its headquarter offices to participate in a panel discussion with MLB Network analyst Harold Reynolds and others.

ABOUT THE NEGRO LEAGUES

On February 13, 1920, Andrew “Rube” Foster led eight independent Black Baseball team owners into a meeting held at the Paseo YMCA in Kansas City, Mo. Out of that meeting came the birth of the Negro National League, the first successful, organized professional Black Baseball League that provided a playing field for African-American and Hispanic baseball players to showcase their world-class baseball abilities. The Negro Leagues would operate for more than 40 years becoming a catalyst for economic growth in African-American communities across the country and helped spark social change in America. More than 20 Negro Leagues players have been inducted into the Baseball Hall of Fame, including Jackie Robinson (1962), Satchel Paige (1971), Josh Gibson (1972), Monte Irvin (1973), Ernie Banks (1977), Willie Mays (1979), Hank Aaron (1982) and Larry Doby (1998).

The Negro Leagues Baseball Museum, located in Kansas City’s historic 18th & Vine District, is the world’s only museum dedicated to preserving and celebrating the rich history of African-American baseball and its impact on the social advancement of America. Incorporated in 1990, the NLBM is a nonprofit organization. Originally contained within a one room office, the Museum currently utilizes 10,000 square feet of space to preserve and tell the history of the Negro Leagues and players. The exhibit features multimedia computer stations, several film exhibits, hundreds of photographs, a replica field with 12 bronze sculptures, and a growing collection of baseball artifacts.