Kansas City, MO – Roy Campanella’s efforts to wire his house in 1952 was the spark that led to a historically significant baseball being delivered to the Negro Leagues Baseball (NLBM) today. The rare baseball, signed by the entire 1952 Brooklyn Dodgers team, was remarkably hand-delivered by the Dodger and Negro League legend to Jack Hofstetter, the owner of a Brooklyn, NY Electrical Supply Store, as a ‘thank you’ for coaching Campanella through his “do-it-yourself” home wiring project.

Nearly 67 years later, comedian Steve Hofstetter, and his brother Adam, delivered the baseball to the NLBM in the same Spalding bag that Campanella had given their grandfather. In an emotionally charged ceremony, the brothers reflected on the chain of events that led to their grandfather obtaining the ball and passing it on their dad, Martin, who was 10 years old at the time. 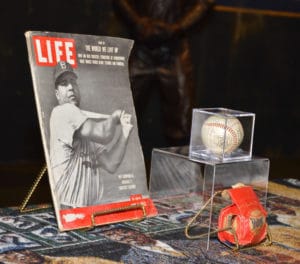 “My dad kept that ball in the original Spalding bag in his sock drawer. It stayed there until he passed away four years ago,” Steve Hofstetter said. “Dad loved the Brooklyn Dodgers and he raised Adam and I on stories of Jackie Robinson and Roy Campanella. He taught us about the Negro Leagues, and I know he’d be so proud to know that his treasured possession will be on display at the Negro Leagues Baseball Museum where a generation of children will hear stories of Jackie, Campy and the other heroes of the Negro Leagues.”

The ‘52 Dodgers, affectionately known as the “Boys of Summer,” included three former Negro Leaguers in Campanella, Joe Black and Jackie Robinson. Black was the National League “Rookie of the Year” that season. The ball does not include the signature of former Negro Leaguer, Don Newcombe, who joined the Dodgers in 1949. Newcombe was serving in the Army during the Korean War that year. In addition to the Negro League connection, the ball features signatures of five National Baseball Hall of Famers (Robinson, Campanella, Pee Wee Reese, Duke Snider and Dick Williams).

The NLBM discovered the baseball after Steve Hofstetter responded to a Twitter post from former Major Leaguer and current ESPN broadcaster, Rick Sutcliffe, who had acknowledged the kindness of Campanella on what would have been the legendary catcher’s 96th birthday (Nov. 19, 2017). Steve shared the story of the baseball in response and Sutcliffe instantly tagged NLBM president, Bob Kendrick. Kendrick wasted little time in a follow-up Tweet asking if Steve would consider allowing the ball to be displayed at the NLBM which led to the Hofstetter brothers delivering the ball today.

“I guess you can say, ‘we’re wired’ about this incredible bobblehead baseball gift to the museum that came about because Roy Campanella took on the challenge of wiring his house,” Kendrick said. “It’s an amazing piece of history and the story behind the baseball is equally amazing. We can’t thank Steve and Adam enough for sharing this family heirloom with us so that the world now gets to enjoy it.”

The NLBM has plans to display the baseball as part of its new “Barrier Breakers” exhibit, which will chronicle the complete integration of Major League Baseball, from the pioneering Robinson joining the Dodgers in 1947 through Elijah “Pumpsie” Green completing the integration cycle by breaking the color barrier with the Boston Red Sox in 1959. The exhibit is expected to open on April 15 as part of the museum’s annual Robinson celebration.